Campsite on the bank of the lake of Pareloup
with covered and heated swimming pool.

Campsite in Aveyron
on the bank of the lake of Pareloup

Campsite in Aveyron at Salles-Curan

Natural campsite near the lake of Pareloup in Occitanie

The 4-star campsite Parc du Charouzech, located in Aveyron, has 101 pitches including a PMR hut. It has an area of ​​1.9 ha. The campsite was created in 1995 on the lands of Charouzech. Le Charouzech was, more than a century ago, a very small farm lost in the middle of Aveyron. The farm was then about twenty hectares. During the Second World War, Valérie BELET, while her husband Joseph was at the front, acquired 164 hectares on her own. Following the end of the Second World War, the State launched the development of hydroelectricity in order to re-equip France in terms of energy, and this in conjunction with EDF. It was then that in 1946, EDF notably came to meet Joseph and Valérie BELET, owners of Charouzech, to announce to them that an artificial lake, Lac de Pareloup, was going to be created. For this, they were told that about 99 hectares of the farm would be submerged under water.

Gilles BELET, the son of Valérie and Joseph, recounted, not so long ago, the amazement that this enormous rise in water levels had created on recently purchased land. However, in the 1980s, the vision changed. Gilles, buyer of the Charouzech farm, and his wife Madeleine, then welcomed a few families wishing to camp by the water for a summer. The number of campers passing by and asking for the possibility of staying on their land for the night, gave rise to the idea of ​​a camping.

Gilles and his son Joel, current operator of the Charouzech farm, then considered creating a 4-star campsite by the lake, on Charouzech land. This was the start of the adventure! The project was born in 1995. Today, the campsite is managed by Marie-Josée, manager of the campsite, the wife of Joel, who is fully dedicated to the development of the campsite. Time and future generations will continue the story...

In order to delight our campers with the beautiful landscape of the Aveyron and in order to protect the environment, campsite Parc du Charouzech always works along with the nature by incorporate the campsite inside the nature. The campsite is located in the heart of an organic farm which belongs to the same family since 2000. Being close to campers and listening their opinions is the key of our success. A friendly, welcoming and authentic campsite. The campsite is safe for children to play in nature. Get an unforgettable experience !
Our vision was to create a calm and nice place for guests to live fulfilling holidays. Enjoy some very deserved holidays in an authentic campsite. Our team is dedicated to help you relieve stress. Great holidays, you are going to love it !

The 4 stars campsite Le Parc du Charouzech is ideally situated in the heart of Aveyron, established on a peninsula of the lake of Pareloup. We have a temperate climat with beautiful sunny afternoons followed by cool nights for a relaxing sleep, icing on the cake : no mosquito bites !

During your holidays, you can discover the most important touristic sites of Aveyron and visit :
-The Gorges du Tarn
-The Caves de Roquefort
-The Viaduc de Millau
-The Cité des Templiers oit the Larzac
-The city of Rodez with the Musée Soulages and the cathedral…
Hobbies and activities “IN BRIEF”

Game fitness and nautical base

By night
2022 reservations are open 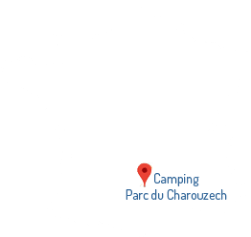